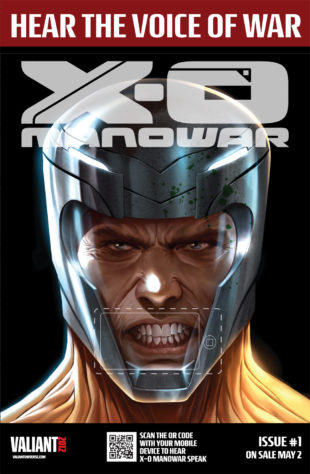 Valiant is proud to announce the X-O Manowar #1 QR Voice Variant — the world’s first QR code-augmented, talking comic book cover! And, starting this February 29th, the only place to see this comic milestone live and in action will be in local comic shops nationwide when Valiant ships thousands of interactive, retailer-exclusive posters previewing this innovative comics breakthrough.

“We want fans worldwide to know that something special is happening in their local comic shop during the build-up to May 2nd and the launch of the new Valiant Universe,” said Valiant Chief Creative Officer Dinesh Shamdasani. “Valiant’s QR Voice Variant is not only a new innovation in comics and a true incentive for retailers, but an enhanced and immersive experience for fans as well.By merging elements of print and digital, we’ve hopefully created something that fans will just have to see in person!”

Illustrated by fan favorite artist Jelena Kevic-Djurdjevic, scripted by Robert Venditti and animated by New York’s Continuity Studios, both the cover and promotional poster will direct smartphone users to a video of X-O Manowar delivering a speech directly to comic fans across the world. On sale May 2nd — from the creative team of New York Times bestselling author Robert Venditti and Eisner Award-winning artist Cary Nord — X-O Manowar #1 begins the journey of Valiant’s greatest hero anew, when a Visigoth warrior dons an alien-armored weapon of incalculable destruction, igniting the Valiant Universe in the process.

“From a storytelling standpoint alone, the technology we’re employing here holds enormous potential,” said Valiant Executive Editor Warren Simons. “For the first time anywhere, and exclusively on the printed page, Valiant can literally give its characters a voice.”

Retailers are encouraged to prominently display their X-O Manowar QR Voice posters to showcase this unique promotional item. Valiant will be also be making print-ready PDFs of the posters, as well as the code itself, available to shop owners for promotional use via their retailer portal on ValiantUniverse.com. This is the second innovative promotion Valiant has announced in as many weeks for the release X-O Manowar #1; earlier this month, the publisher unveiled its Pullbox Exclusive Variant program to reward comic shop patrons who open a subscription for X-O Manowar at their local store with a special edition Cary Nord cover.

“From the beginning, it has been Valiant’s mission to get readers into their local comic shop and talking about what makes this such an exciting medium,” said Valiant CEO Jason Kothari. “A trailblazing effort like the QR Voice poster and accompanying limited edition cover to X-O Manowar #1 not only accomplishes that, but also brings a first-of-its-kind interactive experience to print.”

Thank you for subscribing! Please check your email to confirm.