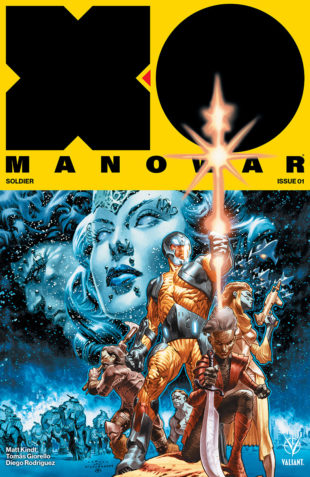 “Congratulations to Matt Kindt and Tomas Giorello on helming a picture-perfect debut that delivered a long-awaited and universally acclaimed new beginning for our most enduring icon – one that has once again reaffirmed Valiant’s place at the leading edge of creative storytelling in comics today,” said Valiant CEO & Chief Creative Officer Dinesh Shamdasani. “Members of the press and public already know that X-O MANOWAR (2017) #1 placed at #12 on the March 2017 sales chart – a robust ranking to be sure, but one that only partially tells the story of this series’ sales success.

“Several factors not accounted for in the publicly disclosed figures – including advance reorders, significant post-sell-out reorders, and the series’ pre-order edition bundle, a brand-new program specifically created for X-O MANOWAR – meant that issue #1 in fact circulated at a rate nearly 50% higher than reported, beating out several high-profile Big Two launches in the process.”

Released to rave reviews and a near-instantaneous sell-out in March, Valiant’s X-O MANOWAR (2017) #1 launched with part one of “SOLDIER” – a punishing, three-issue introduction designed to push Aric of Dacia beyond the farthest limits of our galaxy…and into the brutal opening salvo of the ultimate X-O Manowar tale ever told.

Born under the oppressive thumb of the Roman Empire, Aric of Dacia learned warfare at an early age. It was amid such violence that he was abducted by an alien race. Forced into slavery, he survived where others perished. His escape would come from bonding with a weapon of immeasurable power: the X-O Manowar armor. With it, he returned to Earth…only to find himself stranded in the modern day.

But that was a lifetime ago.

Now, far from home on a strange and primitive new world, Aric has begun a new life. Liberated from his past, he tends to his crops. Free from war. Free from violence. Free from the armor.

But the machinery of death marches his way once again. Conscripted into an alien army and thrown into an unforgiving conflict, the fury inside him finds voice as he is forced to embrace the armor once more. With it, he will decimate armies, topple empires and incite interplanetary warfare as he rises from “SOLDIER” to “GENERAL” to “EMPEROR” to “VISIGOTH.” They wanted a weapon. He will give them war!

Over the course of 2017, X-O Manowar’s staggering assault on an alien world will continue at breakneck speed as a rotating cast of Valiant’s top artistic talents join Matt Kindt for Valiant’s biggest series of the year. This summer, step into the fray and watch awe-inspiring artists Tomas Giorello (4001 A.D.: WAR MOTHER), Doug Braithwaite (ARMOR HUNTERS, Justice), Clayton Crain (RAI), Mico Suayan (BLOODSHOT REBORN), and Ryan Bodenheim (The Dying & The Dead) as they chart Aric of Dacia’s rise from “SOLDIER” to “GENERAL” to “EMPEROR” and, eventually, to “VISIGOTH” across a series of clearly designated, three-issue jumping-on points:

An unprecedented undertaking on virtually every front for any publisher, Valiant has even gone so far as to regiment its 2017 publishing schedule around “X-O MANOWAR WEDNESDAYS” – a consistent, monthly on-sale date that will include the latest issue of X-O MANOWAR on the fourth Wednesday of every month alongside a brand-new launch title, jumping-on point, or key issue from the best-reviewed publisher in comics! Across each and every fourth Wednesday in 2017, Valiant is giving fans at least two reasons to visit their local comic shop – continuing with X-O MANOWAR (2017) #2 and BRITANNIA: WE WHO ARE ABOUT TO DIE #1 (of 4) on April 26th.

Deep within the far reaches of space, the dogs of war have found Aric of Dacia. Conscripted into an alien army and forced into combat, Aric must enter an alien battlefield unlike any he’s faced before. His only hope for survival is also the source of his greatest rage – the living suit of armor known as X-O Manowar.

Join the battle that has taken the comic book industry by storm on April 26th as Matt Kindt & Tomas Giorello propel Aric of Dacia’s chart-dominating debut forward…and force the unstoppable X-O Manowar onto the front lines of an eons-old extraterrestrial battlefield that will forever shape the future of the Valiant Universe’s greatest hero in X-O MANOWAR (2017) #2 – in stores alongside the X-O MANOWAR (2017) #1 SECOND PRINTING!

Thank you for subscribing to the Valiant Voice newsletter!